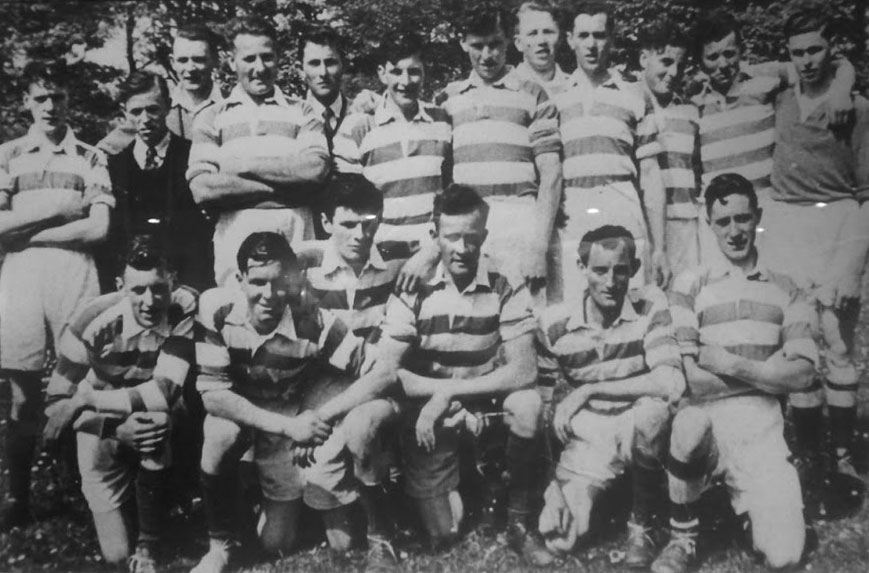 The late Captain Thomas P. Lyons was for over four decades the pulse of Breaffy G.A.A. Club. He devoted his life to serving the community and in particular the Gaelic Athletic Association. He became involved with the Association in the early 1950’s and was instrumental in acquiring the present grounds from the Land Commission. He led the Club through the following four decades and served over thirty years on the West Mayo Board, and as chairman for fourteen years. He was a member of the Connaught Council from 1969 to 1984, the Central Activities Committee from 1973 to 1976 and the Central Communications Committee from 1980 to 1983. During all this time he remained Chairman of his beloved Breaffy Club.

Origins of the Field

Josiah Browne, a Catholic landowner from Sussex, England, settled in The Neale in 1860 on land purchased from the McMylers. The Breaffy connection is with his son, John, who was granted 200 acres of land there during the period of land confiscation’s of the Cromwellian Settlements at the end of the 17th century. The land was in the townlands of Breaffy, Ballyheane and Barney, and confiscated from Myles, Ulick and William Bourke. The Breaffy GAA Club acquired the playing field from the Irish Land Commission in 1973 at a cost of £336. The sheds cost £85 at public Auction.

Records show that Breaffy was involved in the GAA as early as 1906. The Connaught Telegraph, in a report of the 14th April, 1906 of a meeting of the County Committee of the GAA, states: “Breaffy was represented by Myles Fahey and Thomas Kenny”. The same paper in its issue of 12th May 1906, states: “At a County Committee meeting held in Castlebar, Breaffy were represented by J.W. Caulfield. Fixtures made included Kilmeena V Breaffy at Westport. The Connaught Telegraph of the 28th May 1906 reported as follows: “Kilmeena V Breaffy – Breaffy team: Cummings (Captain), Golden, Conroy, A. McHale, J. McHale, Kennedy, McGreevy, Browne, Ludden, McHugh, Fahey, Joyce, Barrett, Cannon, McEvilly, Fox. The Breaffy men showed a great lack of practice and appeared to be unaccustomed to one another on the field. They have good material but practice must on no account be overlooked. The final score was in favour of Kilmeena.”
There is also a report in the same paper of the 9th April 1910 of a match in the field of Mr. Jacob Beckett now Known as Spencer Park of a match played in ideal conditions between Castlebar Mitchells and a selection from Breaffy and Keelogues. It was refereed by Mr. John Ryan of the Mayo County Board. Mitchells played with a stiff breeze in the first half and did most of the scoring in spite of a fine performance from Michael Mitchell in goal. The story was reversed in the second half before Mitchells ran out winners:
Breaffy/Keelogues 3-2 (11), Castlebar Mitchell’s 1-12.
The Connaught Telegraph of 5th May 1928 reported on a match at Pigeon Park, Castlebar that was a replay of the 1927 Hurling Championship Final ordered by the County Board between Ballyheane and Westport. Ballyheane put up a fine performance in a spectacular game to secure the medals; Ballyheane 3-1, Westport 1-2. Paddy Rainsford, Castlebar was the referee. Ballyheane: – M. O’Leary, T. O’Grady, N. O’Neill, P. Hanley, P. Kelly, A. O’Malley, M. McCourt, T. O’Sullivan, P. Bourke, M. McCarthy, M. Higgins (Capt.), J. O’Brien, J. McGovern, Jack Connor, J. Kilcourse, Subs. Jim Connor, M. Kilcourse.

Breaffy GAA Club was formed in 1953. The first officers were: Chairman – Paddy Golden, Secretary – Frank Quinn, Treasurer – Bill Ralph. The newly formed team played their first match against Aughagower in the Desmesne, in the field, which is now the club’s old ground. Johnny Golden was the captain, scored the first goal and Bernie King scored the first point. The club won divisional honours in 1955 and 1956 and the minor team won the divisional 9 a side league in 1956. The Connaught Telegraph of 20th March 1954 reports on the Breaffy GAA Club convention. Paddy Golden presided. Bill Ralph, Secretary reported: – ” A GAA club was formed in Breaffy last year, the first in a generation. A few local boys who were keen on the grand old game of Gaelic Football got together and started practising in the evenings and soon others joined their ranks. In our first year we achieved more in a few months than others accomplished in as many years. We defeated Aughagower in our first game at home and then Westport. Breaffy in our first year were winners of the division B grade. Our minors in conjunction with Islandeady defeated Louisburgh in the first round and Mulranny in the second. We lost to Castlebar in the final. We supplied one of the glorious All-Ireland minors in Mick Kennedy.” Officers elected: – Chairman – Paddy Golden, Vice Chairman – Bill Ralph, Secretary – Martin McEllin, Treasurer – Frank Quinn, Team Captain – Mick Kennedy, Vice Captain – Jimmy Barrett.