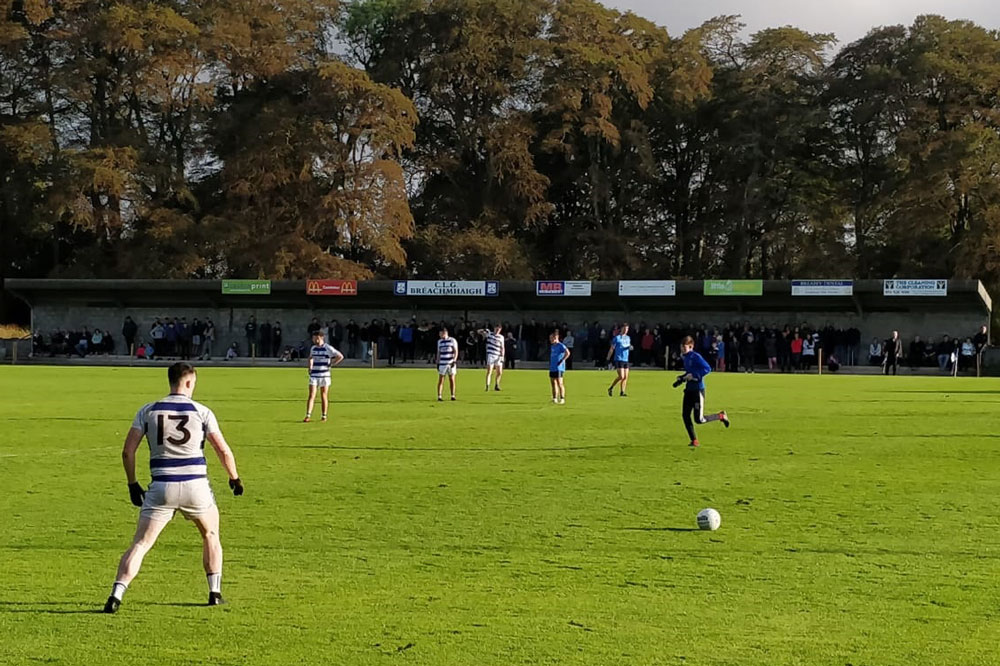 Breaffy returned to Mayo GAA Senior League action with a hard-fought draw against Westport in Breaffy on Saturday evening. Many of Mayo’s county stars returned to their club’s line-ups on the evening following their exploits with the County team during the summer. Fionn McDonagh lined out at centre forward for Westport, while Rob Hennelly manned the goal for Breaffy, alongside a midfield pairing of Seamus O’Shea and Matthew Ruane.

Breaffy made a strong start to the opening half and Liam Irwin slotted a free after 2 minutes to give his side the lead. The same player immediately extended his side’s advantage with a fine goal after being played through by Paul McDermott, Irwin finishing to the roof of the net with aplomb.

Westport almost responded immediately with a goal of their own but Rob Hennelly stood tall to block Fionn McDonagh’s goal-bound effort, before goalkeeper Patrick O’Malley came forward to point a long range free to open his side’s account.

Westport didn’t have to wait long for their goal to come however,  and following a long run forward by full back Kevin Keane, some fine skill and a quick exchange of passes saw Westport’s wing back fire to the net to leave the sides level after 10 minutes.

Two quickfire scores saw Westport take the lead for the first time in the match before an excellent score from play from Colm Flynn reduced the gap to the minimum. However, 3 Westport scores on the trot, including 2 from Fionn McDonagh put the away side in command.

As the weather conditions deteriorated, Breaffy began to get a stranglehold around midfield and finished the half strongly with points from a free by Conor O’Shea and two from play from the outstanding Irwin, saw the half time deficit reduced to the minimum.

Breaffy continued to impress as the second half began and 2 further early points from Liam Irwin saw them retake the lead. Scores were at a premium in the second half and when Peter Dravins fed Gerry Jennings on an overlapping run late in the half, Jennings used all his experience to fist over the bar to put his side a point up with time running out.

With just 2 minutes left on the clock, Westport won a free which Fionn McDonagh coolly dispatched to leave the sides level once more. Breaffy pushed for a late winner but were unable to find one against a stubborn Westport rearguard before time elapsed on Vincent Neary’s watch.

Breaffy’s next game is at home to Kiltane in round 2 of the Mayo Championship. The game throws in on Sunday, August 25th at 3PM.

GAA – WHERE WE ALL BELONG