The following were the winning tickets:

The Breaffy GAA 25 Card Drive resumes after the summer break in Breaffy Clubhouse. Starting on Tuesday September 6th at 9PM, all are welcome. 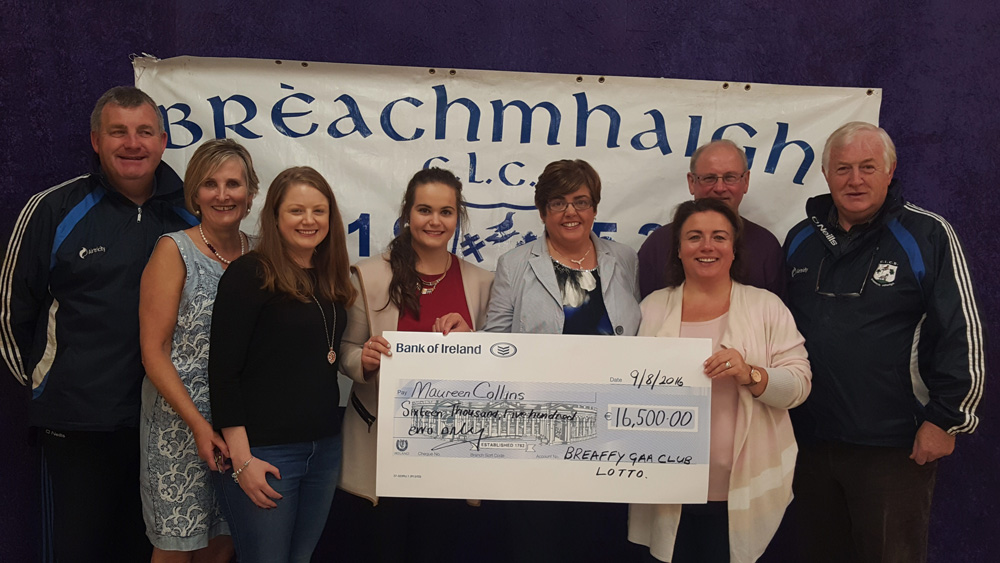 Breaffy GAA’s Club development lotto jackpot of €16,500 was won recently by club member and supporter Maureen Collins. Breaffy would like to congratulate Maureen and her family – Michael, Patrick and Aileen and wish them well.

Maureen was presented with her cheque at Breaffy Clubhouse by Club Treasurer Lorraine Hall and Club Secretary Nuala Bourke.

A big congratulations to Jimmy Barrett who won the accumulator at the Breaffy GAA 25 card game.

He is pictured receiving the ‘Jim Jordan’ Memorial Shield from Fionnuala Lynch.

Aidan made the journey to the US to participate at an NFL combine while the former Miami Dolphins wide receiver Roberto came to Breaffy for a week of training with our senior panel which also included experiencing the sights that the local area has to offer.

Breaffy Bord Na nÓg GAA Club held its annual underage awards evening recently in Breaffy GAA Clubhouse. Michael Callaghan, Breaffy Bord Na nÓg Chairperson, introduced special guest for the presentation evening Roberto Wallace, NFL star, who was a former Miami Dolphins wide receiver and speed coach. Roberto is with the Breaffy Club for a week to get a taste of how to play Gaelic Football and to immerse himself in the Culture of the GAA and experience its uniqueness, while Breaffy’s  Aiden O’ Shea has gone to an NFL  American Football Team to experience how American football is played.

We would like to thank the kind sponsors of our fundraiser and we would also like to thank all who supported us by attending the fundraiser on the night making it a successful evening of entertainment.