Tag Archive for: breaffy under 6 academy

You are here: Home1 / breaffy under 6 academy 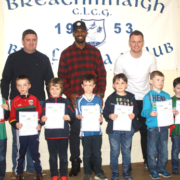 Every Saturday morning after St. Patrick’s Day until the end of September Breaffy GAA football pitch is filled with the noise of over 100 children and a dozen coaches active in the learning and teaching of the skills of Gaelic football. The Breaffy GAA U6 Academy was an idea developed to let children become involved in Gaelic games at a younger age in a fun, safe environment. In the past players would join Breaffy GAA when they were 7 or 8 years old and join as U8s. There are now over 30 players aged between 4 and 6 in the U6 group in 2016 and 7 coaches. END_OF_DOCUMENT_TOKEN_TO_BE_REPLACED